Connecticut Shooting and Jesus: A Massacre of the Innocents 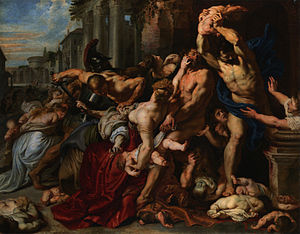 Peter Paul Ruben: Massacre of the Innocents. Painted 100 years before Newton, Connecticut was founded and 400 years before the recent American Massacre at Sandy Hook Elementary School

I believe that this year, the Lord wants to be near the people of Newton. Just as the birth of Jesus was seared into the memory of Bethlehem by a massacre of innocent children by soldiers commissioned by Herod, so also, satan inspired this man to kill children around Christmas time this year.

Normally, the sheep of Bethlehem were the only offerings used to please God, but God was pleased in Jesus day to fulfill prophecy by permitting the death of children. Bethlehem had been the home of King David, a renowned figure, who set Israel free from pagan oppression and harassment. Normally, the town of Newton is small: only about 25,000. The town’s most notable person was James Purdy, who helped slaves escape to Canada in the 1850s and ministered to smallpox victims during the American Civil War, but now a man enslaved by anger attacked and killed many. The athlete Bruce Jenner, political leaders, and some authors also came from Newton. Nowadays, the following industries are the most prominent: manufacturing, professional, scientific, and technical services, construction, retail trade … Like Bethlehem, Newton was an ordinary town with a proud heritage.

The news of Bethlehem was conveyed in the Good News account of Matthew of the New Testament in the Christian Scriptures. The Bad News of Newton is heard wherever you turn. The murderer in this case was apparently upset by the divorce of his parents. Herod was troubled by the threat to his throne.

This shooting was the second deadliest school shooting in American History. The deadliest was a massacre at Virginia Tech. While the massacre at Bethlehem was a deadly and brutal act during Herod’s reign, he was more known for killing his own relatives and nobles in an attempt to elicit mourners and remove competition. Bethlehem consisted of only a few hundred inhabitants in Jesus’ day, thus the death of male infants would not have been mentioned in ancient secular-historical accounts.

Out of Bethlehem came Jesus. Perhaps some Jewish scholars doubted that Jesus came from there because so many were killed. “Surely he would have died in that generation if he was born there,” they speculated. But God had a divine purposed. Evil has a limited purpose. If some lives were destroyed by evil, we can be sure that those who remain are alive for a reason. They have a calling from God to live for Him.

This may seem to be of no comfort to the parents who lost children. But we cannot go back and revive all who died. We must go on living. Life is for the living and those who are dead though seemingly alive may truly live.

You are alive. You have a pulse. Evil has yet to consume you entirely. Will you live for God or for yourself? Will you fulfill your God-designed purpose or live like a beast seeking only bodily needs and acting on impulse.

This Christmas, we do not need merely civil religion uttering platitudes. We need redemption from slavery to sin and the sickness of soul that afflicts our race. We need men like James Purdy who will not stand idly by as violence happens against the human race. We need Jesus.

May God be with those this year who suffer persecution and massacre on a regular basis in cities and towns around the world where the Name of the Son of God, the King of Israel, and the Prince of Peace is not tolerated. May Jesus also be God with us, Immanuel.

One thought on “Connecticut Shooting and Jesus: A Massacre of the Innocents”